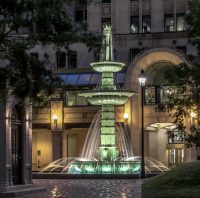 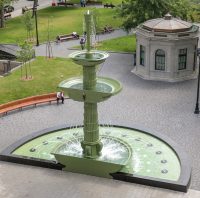 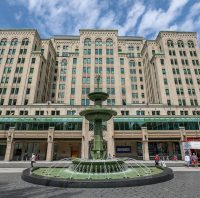 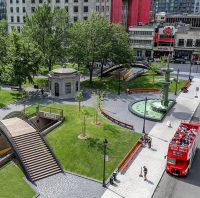 On the northside of historic Dorchester Square in downtown Montreal, Quebec, there sits a unique new feature that seamlessly blends historic charm with a quirky, modern aesthetic. It’s an ornate Victorian-style fountain, crafted by Robinson Iron, that appears to have been cut in half.

Looking at the 10-meter-high fountain directly from the front, one might assume the fountain installation had been there since the square’s original construction in the mid-nineteenth century. But move toward the side, and you’ll see that the backside is flat, creating the illusion that the fountain is “sliced” in half by the insertion of the sidewalk behind it. It is truly a unique design that is unlike any other that Robinson Iron has fabricated.

The Dorchester Square Fountain was part of an $8.9 million renovation/expansion project designed by landscape designer Claude Cormier, who hired us to fabricate the unique fountain. The renovation also included constructing two decorative arched footbridges on either side of the fountain, each traversing vehicle ramps to the parking garage below.

The half-fountain design was intentional, Cormier says, both for logistical reasons and as a nod to the history of Dorchester Square itself.

“The original plan included a full fountain,” Cormier told the Montreal Gazette. “It was sliced because the road had to be a certain width for the tourist buses, and we needed wide sidewalks.”

At the same time, the half-fountain design pays homage to the fact that the northern side of Dorchester Square was itself “sliced” in the middle of the 20th century — cut off to make room for an expanded road and an underground parking garage.

Following the architect’s specifications, Robinson Iron crafted the fountain with three semi-circle water basins made of cast aluminum, each progressively larger from top to bottom.

To add interest to the fountain’s flat side, Cormier called for the addition of a 19-inch aluminum pileated woodpecker positioned two-thirds of the way up the backside, its bright red crest contrasting beautifully with the faux patina-green hue of the fountain itself. Robinson Iron fashioned the fountain’s components in our Alabama-based foundry before transporting them to the park to be installed.

Robinson Iron is honored to have been selected by Claude Cormier to participate in this restoration project of Dorchester Square in Montreal. We are also pleased that our handiwork has become an integral part of the beautiful Montreal cityscape. We anticipate the new Dorchester Square Fountain securing its place in the city’s architectural fabric for many decades to come.

Over the years, Robinson Iron has positioned itself as the cast metal specialist for city planners, landscape architects, and historic institutions worldwide. To inquire about our services, call us at 1.800.824.2157.