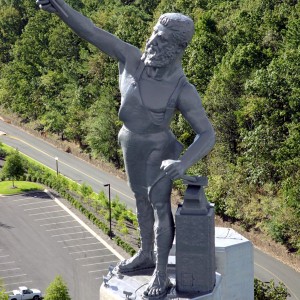 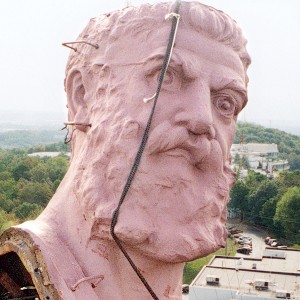 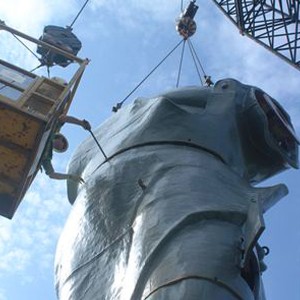 Cast in 1904 from local foundries, Vulcan glorified Birmingham. Alabama, the South’s leading industrial center in the 1900s. At 56 feet in height, Vulcan is the tallest freestanding cast iron sculpture in the world and required significant knowledge by Robinson Iron during the disassembly and restoration process of the 120,000-pound deteriorating and damaged statue. Nylon straps and netting were used to secure the cracked areas of the statue during the dismantling. A “belt-and suspenders” approach to rigging the statue components was employed: if the primary system failed, the secondary system would not allow the castings to fall. Engineering calculations and historic newspaper accounts were also used extensively to determine the weight of each component casting. The original rigging points were located and utilized for lifting purposes.

Originally in 1938 the statue’s hollow core was filled with concrete to the waist, but during restoration Robinson Iron’s team created a stainless-steel skeleton, an armature of one inch thick plates extending like a truss throughout Vulcan’s body, to provide a method to re-anchor and provide wind resistance up to 140 miles per hour. Robinson Iron’s technicians removed decades’ worth of paint layers to return the statue to its original gray, emulating the color of raw cast iron. The restoration of Italian sculptor Guiseppe Moretti’s Vulcan, Roman God of Iron, was remounted by Robinson Iron on a pedestal that raised his total height to 179 feet—and placed atop a mountain that upped his elevation to nearly 600 feet.